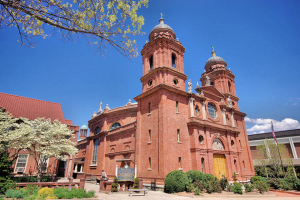 The Basilica of St. Lawrence is one of the most recognized landmarks in Asheville. It’s considered one of the main fixtures of the city’s skyline. While this place has long been a place of worship for many Asheville residents, it might be a place where ghosts could appear. Some say it is also a place where poltergeist activity might be taking place. We’ll be discussing this magnificent structure’s history and tell the stories of why it might be one of the most haunted places in this mountainous city in western North Carolina.

The Basilica of St. Lawrence was designed by Rafael Guastavino, a Spanish architect that would soon call Asheville home in his retirement. Today, most of his work is on display in some locations throughout North Carolina. They include the Duke Chapel on the school’s campus in Durham, the Basilica of St. Mary in Wilmington, and the Motley Memorial in Chapel Hill. The design, both inside and out, is a sight to behold. It was based on Guastavino’s Catalan roots. One of the building’s main features is a dome measured at 58 feet by 82 feet, one of the largest free-standing basilica domes in North America.

Three years after the Basilica began construction, Guastavino died. He would never live to see the completion of his greatest creation. Before his death, his last request was for him to be buried inside the basilica’s walls with enough space for his wife and child. Though his request was fulfilled, a law since passed disallowing remains buried on public or private property. When his wife and daughter passed, they were both interred in a cemetery near the basilica.

Even though it was one of his major masterpieces, Guastavino left behind a legacy and a different architectural style known as the Guastavino system. Examples of this design can be seen in notable American landmarks, including three of New York City’s most popular places. The Grand Central Station Terminal, Carnegie Hall, and Grant’s Tomb are among the buildings that were designed based on Gusatavino’s architecture. In 1993, then-Pope John Paul II dedicated the church as a Basilica. 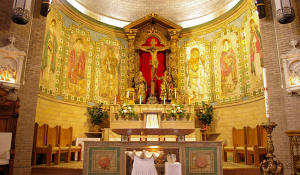 The basilica’s interior contains statues of the various saints of the Catholic Church, including the namesake of St. Lawrence. Other statues, including St. Cecilia, St. Patrick, St. Rose of Lima, and St. Peter the Apostle are placed in the chapel. Inside the main sanctuary sits an altar that is made from marble. Above it is a wood carving of the scene where the Virgin Mary and John the Apostle are mourning the crucifixion of Jesus Christ. The stained-glass windows that adorn the basilica were made in Germany. Each window depicts a scene in the Bible, including the Annunciation and Visitation of the Virgin Mary, the Nativity of Christ, and various scenes of Christ’s teachings.

The basilica has two chapels on both the left and right side of the high altar. The left chapel is known as the Chapel of Our Lady. The chapel contains a marble altar adorned with a statue of the Holy Conception, where the Virgin Mary is surrounded by two angels. Carvings of many of the female Saints are also adorned in the chapel. Aside from the many statues and carvings paying homage to the Saints, the crypt of Rafael Guastavino is located in the rear left corner of this very chapel.

The chapel on the right is the Eucharistic Adoration Chapel. This chapel is often used during private prayer ceremonies and for Eucharistic adoration. The Holy Eucharist is displayed on the chapel’s altar before and after Mass. Churchgoers will often visit that part of the chapel for a brief prayer or meditation. The stained glass window depicting the Nativity of Christ is found in this chapel along with a depiction of the namesake, St. Lawrence.

On the grounds of the Basilica includes a rectory, a gift shop, and a garden dedicated to St. Mary. While the basilica is a thing of beauty both inside and out, it’s no wonder it’s one of the most visited places when people travel to Asheville. But aside from its architecture, there are some stories of paranormal activity that might just leave someone’s hair to stand on end. 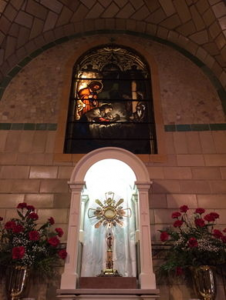 You might think that religion and paranormal activity don’t mix. But believe it or not, many of the people who congregate for Mass have witnessed ghosts and various paranormal activities in the past. One of the spirits said to wander the halls is a priest who passed away in the church. He might be seen outside of the chapel as if he were greeting or saying a parting message to every attendee along the way (as it is standard practice, priests are known for meeting with them after Mass). One of the other ghosts that is said to haunt the halls just so happens to be the architect of the basilica himself. And even though they are buried a mile away, the spirits of Guastavino’s wife and daughter are said to live here as well.

Many of the church’s congregants have reported feeling random cold spots from time to time. Others have reported strange activities, including lights flickering on and off at odd times of the day and doors opening and closing by themselves. Rumor has it that some poltergeist activity may have taken place. Considering that one person is buried literally inside the church walls, that should come as no surprise.

When Is It A Good Time To Visit?

While you don’t have to be religious to visit a church, you can visit the church anytime between Tuesday and Friday during normal business hours. You can even catch a guided tour of the Basilica if you ever get the chance to go to Asheville. You’ll learn about the church’s history, facts about the building, and so much more. However, you might just come across some “familiar faces” that come and go. While it’s not guaranteed that you will see any paranormal activity, it’s always a good idea to check out this place for yourself. You’ll never know what you’ll see when you take a tour of this large building that is adorned with beautiful European made statues. Also, if you regularly attend Mass, that is a good time to attend one. Don’t be surprised if the spirit of a priest greets you at the door or parts you with some message of encouragement before disappearing into thin air.

The Basilica of St. Lawrence is one of those “can’t miss” places. Not only will it stand out amongst the rest of the buildings in Asheville, but it is also a place where you really don’t want to miss the opportunity of checking out when you are in the city. This is a place where those who appreciate architecture and even some paranormal activity should add onto their list of “places to go before they die” (no pun intended). Whether you consider yourself religious or not, you do not want to miss the opportunity to see some paranormal happenings or a ghost right before your very eyes.