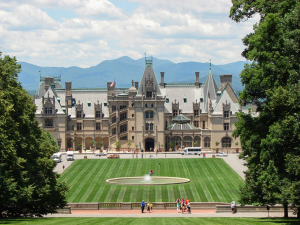 The Biltmore Estate is an estate that exudes majesty and grandeur. It is a place where many from outside of Asheville tend to flock to whenever they are in the mountainous North Carolina City. The architecture is awe-inspiring. The grounds are vasts. And the hauntings are quite common. Yes, we said it. Hauntings are quite common in this palace built for a member of one of America’s most prominent families. Learn about the history of the building and the stories of why this beautiful home might be haunted by ghosts who are not only the past residents of the home but also the past revelers.

The Biltmore Estate sits on 8,000 acres of land. The house itself was constructed from 1889 to 1895 as the private residence of George Washington Vanderbilt. Vanderbilt had been making frequent trips to Asheville since his mother had resided there. Each time he visited, he fell more in love with the city and the scenery surrounding it. So much so that he decided to construct a summer home. His older siblings had already built summer homes in their own right in New York and Rhode Island, respectively. But George Vanderbilt wanted something that he wanted to call his “summer getaway home.” And thus, the idea of the Biltmore was conceived.

You might think that the “Bilt” in Biltmore is a play on his family name. However, this is not the case. But he does pay homage to Vanderbilt’s Dutch heritage. Biltmore is a combination of De Bilt, a region of the Netherlands where the family originated from and ‘more,’ from Anglo-Saxon that roughly translates to ‘rolling land.’ Vanderbilt purchased many acres of land as part of the estate’s property. These included various farms and even cemeteries.

Construction of the house began in 1889. To keep the construction going at a steady pace, a woodworking factory and a brick kiln were both added to the site. The kiln was said to produce as many as 32,000 bricks per day. Also constructed was a private railroad connected to the estate so items and other goods could be distributed. More than 1,000 laborers had helped build the house. While construction was underway, Vanderbilt traveled across Europe to find interior decor for his newly built home. His home was completed in 1895, and he christened it with a party on Christmas Eve for distinguished guests. Many prominent figures have visited or stayed in this home, including several ambassadors, authors, and U.S. Presidents.

One of Asheville’s landmarks (and believe it or not haunted places) sits on the property’s edge. The Shiloh Forestry Compound or the Biltmore Forestry School was constructed on the grounds of the estate. It is here that Carl Schenck was hired as a forester for the estate. His knowledge on the topic interested Vanderbilt and many of the locals. Schenck opened up the forestry school and had offered a one-year course for those who wanted to learn practical forestry techniques. Things came to a head when Schenck and Vanderbilt disputed the payment for the work, thus leading to Schenck’s departure and the school’s subsequent closure. The building still stands today and is haunted in its own right (a bit more on that later).

Vanderbilt would later die from complications stemming from an emergency appendectomy in Washington, D.C., at the age of 51. At his request, his wife Edith carried out his request that the land on his property would not be touched. The home would still be used as a private residence until after the Great Depression hit. To keep the residence afloat financially, George and Edith’s daughter, Cornelia Vanderbilt would open the estate to the public as a tourist attraction.

However, as the United States entered World War II, the estate was temporarily closed to the public. For fear of a potential attack against Axis powers, many of the estate’s artifacts were relocated to a protected area, so they were not destroyed. Some of the artifacts included the famous George Washington portrait that was painted by Gilbert Stuart.

The Biltmore estate continued to be maintained by members of the Vanderbilt family, including the sons of Cornelia Vanderbilt. Her son John Cecil lived in the house until his passing in 1956. His elder brother George also lived in the home until 1956. However, it wasn’t long until the youngest of Cornelia’s children would soon occupy and maintain the home to make it more profitable. The estate became a historical landmark in 1963. As of today, the estate sees more than a million visitors per year. But how many of them have witnessed some strange activity or may have heard or seen some spirits roaming around the halls? 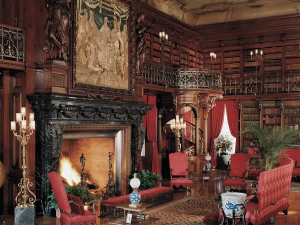 While the estate sees so many visitors every year, there probably is no shortage of ghost stories that can be told about the Biltmore Estate. Many past visitors and even staff members have told stories of the hearing a voice whispering the name “George” repeatedly in the hallways. It is believed that the spirit of Edith Vanderbilt herself is wandering the halls and possibly searching for her husband, who is also believed to be another spirit that is reported to also live in the mansion as well. At night, some of the people working the grounds had heard sounds of laughter, glasses clinking, and party-like chatter. The only problem is that no one is throwing a party.

Most of the visitors had reported seeing spirits going up or down the stairs. Sounds of footsteps had also been heard on multiple occasions. Not to be outdone, there have been reports of strange smells, cold spots, and eerie feelings when visitors would go up or down the stairs. To add to the strange factor, there are a number of headless mannequins that are stored in one of the 200 rooms of the house. The mannequins were dressed in period clothing (dated specifically back to the early 20th century). As for George Washington Vanderbilt himself, his spirit could be seen all over the place. But if you are hunting for the apparition of George and seem to be running out of options, he’s probably in his beloved study surrounded by his library of books.

Whether the Vanderbilts had owned pets are not is unknown. But some have reported seeing a headless orange cat roaming the garden area. Just another one of the many creepy and downright scary things that you might see if you ever get the chance to tour the Vanderbilt Estate.

As mentioned before, another haunted spot is also on the property. The old Forestry Compound that once was the Biltmore Forestry School was the site of a prostitute’s murder. The spirit of the woman, along with a few others who were executed by hanging inside the old building, is said to be haunting the halls of the old compound. However, they have never been sighted anywhere beyond that part of the property.

The Biltmore Estate is not only one of the largest private residence museums in America, but it might just be one of the most haunted. For a place that contains not one, but two of the most haunted places, it’s a must-see attraction if you ever find yourself in the Asheville area. If you are in for the spook of a lifetime, then you probably should book a tour of the Biltmore estate.