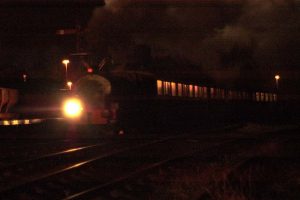 A terrifying train wreck leads to the apparent birth of a ghost train that still rolls along the tracks of North Carolina’s state line on the anniversary of its grisly end. Is there any truth to the ghost train of the Bostian Bridge?

On August 27, 1891, at 2:30 in the morning, an overnight sleeper train, the Steam Locomotive No. 166, left Statesville, North Carolina. It pulled a 6-car train: a first and second-class car,  a tender, a baggage car, a Pullman sleeper, and the superintendent’s private car. The train was on the Western North Carolina Railroad (known as the Richmond and Danville) and took its passengers from Salisbury to Asheville, North Carolina.

It was about 35 minutes behind its schedule, so the train’s engineer had them traveling at a healthy clip of 35-40 miles per hour to catch up to its timetable. Within 5 minutes of leaving Statesville, the train was coming up on the Bostian Train Bridge, a five-span bridge of brick and natural stone. It would carry the train over Third Creek, some 60 feet down into a streambed.

The passengers were all sleeping peacefully when suddenly all hell broke loose.

Due to unknown circumstances, the train jumped the tracks and violently derailed. The wooden passenger cars splintered and burst apart as they crashed over 60 feet into the Third Creek streambed below. The speed the train had been going meant it was airborne when it left its tracks–the sleeper car flew 153 feet through the air before it landed in the creekbed.

By some miracle, not everyone was instantly killed on board. Those who could manage it were forced to not only escape the carnage but then walk back to the Statesville Station for help.

While waiting for help from the authorities, the creek began to rise immediately because the train wreckage was blocking the water. Unfortunately, some trapped survivors ended up drowning as the waters rose.

There was no hospital in Statesville or in any nearby towns at the time, so the survivors were taken into people’s private homes. A local farmer’s tobacco warehouse was used to keep the mangled corpses of the dead after they were pulled from the wreckage via search and rescue workers. In the end, 23 people were either killed in the wreck or drowned afterward. It’s still considered one of Iredell County’s worst disasters.

The Aftermath of the Disaster

The site became a media circus as haunting pictures of the devastation circulated in the local papers. Photographers like Willliam Stimson and a Mr. VanNess sold hundreds of photographs to people coming to see the wreck and watch the search and rescue proceedings.

Almost a week after the accident, a coroner’s inquiry officially determined the train derailed because some spikes holding the rails together had been stolen!

Others speculated that the railroad and bridge’s whole infrastructure had been shoddy for a while, and this kind of a disaster had been inevitable.

At the time, the R&D railway experienced a shortage of finances, so they worked hard to find the culprits and stave off suits for damages.

It took several years, but the Bostian Train Disaster was finally pinned on two men in 1897. The men were already in jail, and they had confessed to the crime to their fellow inmates.

Even though the suspects were captured, those who perished seem to be still lingering. Every year on the anniversary, a ghost train replays its last trip.

On the 50th anniversary of the accident in 1941, a couple’s car broke down on the side of the road. The wife was waiting for her husband to return with a new tire. There was a train whistle in the distance, and she felt the rumbling of an oncoming train. The headlight swept through the trees, and she watched the old-fashioned steam locomotive head towards the Bostian Bridge. The train jumped its tracks to her horror as it hit the bridge and crashed into the creekbed.

She could hear the splintering of the wooden cars, the passengers’ screams, the crunching of metal. She ran to the embankment’s edge and saw “a twisted mass of wreckage being flooded by the waters of the Third Creek.”

She told her husband when he returned what she had seen and was about to send him for help. It was eerily silent when he ran to the side of the cliff where the creek ran below. There was nothing in the creekbed.

He tried to play it off as a nightmare that she had fallen asleep while waiting for him. Determined that she had seen something awful, they went to the Stateville Train station and talked to the clerk at the window.

When she asked about a train wreck, he told her that there had not been an accident that night, but it was pretty strange she was asking on the anniversary of the 1891 disaster 50 years previous.

As he explained the story of the disaster, the woman screamed in terror and fainted. She’d realized she had seen a ghost train reliving its last moments.

On other anniversaries, people claim to have heard the screeching of the wheels trying to stop and the screams from the doomed passengers. A ghostly figure of a uniformed railway employee who wears a gold watch showed up on the accident’s first anniversary. It’s believed to be the Baggage Master, Hugh. K. Linster, who was found with a broken neck on the tracks.

When Ghost Hunting Goes Too Far

In 2010, on the 119th anniversary of the disaster, a team of amateur ghost hunters (about 10-12 people) came to the bridge to investigate and hopefully record the ghost train.

Three people were on the bridge illegally when, at 2:45 in the morning, a Norfolk Southern train came barreling down the bridge. Since it was around the accident, those on the tracks were frozen, thinking it was the ghost train bearing down on them. Those few seconds it took to realize it was an authentic train aiming for them ended up costing them dearly.

While two could escape with injuries, one 29-year old man named Christopher Kaiser was killed when he was hit by the train. A woman Kaiser was trying to save fell about twelve feet from the bridge and rushed to the emergency room in Charlotte due to her extreme injuries. She managed to survive the incident.

Why Does the Train Return?

When it comes to hauntings, there are a few different types that can be categorized together. The two broadest categories are hauntings, either known as an intelligent haunting or a residual haunting.

An intelligent haunting is something like a poltergeist. The entity can be observed reacting to stimuli. It tries to communicate with people. There’s a semblance of sentience in the activity. It doesn’t matter whether it’s responding positively or negatively, as long as it’s reacting.

A residual haunting is not intelligent. It can be best described as a video clip playing on a loop. The spirit that walks the halls every night, taking the same path and never interacting with anyone, would be considered a residual haunting. If the ghost walks through a wall, it’s probably because in the “recording,” that wall wasn’t there.

The Bostian Bridge train wreck seems to be a residual haunting. When there’s a major tragedy like that, the energy of the people’s emotions and actions leaves an impression. This impression will play itself repeatedly when the conditions are right (it’s the anniversary, the weather is the same, etc.). Some believe that limestone “records” incidents better, so places with residual hauntings are usually near limestone deposits.

It seems like the tragedy was such a horrible accident that the same train and its passengers left an imprint of their pain and anguish upon the land. That imprint may continue to play out the incident for years and years to come until there’s no energy left to replay.

If you decide to check out the Bostian Bridge on the anniversary, please stay away from the tracks and offer a moment of silence for those souls doomed to ride the rails forever.

Curious about another haunted bridge in North Carolina? Click here to read about the infamous Helen’s Bridge

Check out more haunted locations, watch a ghost tour from home, or book a ghost tour of Asheville in person at https://ashevilleterrors.com.