Building #9 of the Old VA Hospital 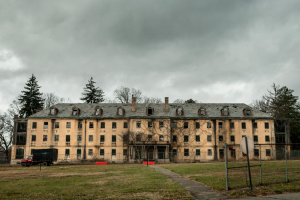 Ever wondered how haunted an old hospital building might be? Of course, there are plenty of them across the country. Yet, one part of the old Charles George VA hospital in Asheville, North Carolina is so haunted that those who had dared to visit the old #9 building can tell tales of terror that could rival any ghost story you may have heard of. But is it still a place worth visiting today? And how haunted is it? We will discuss the history of the old VA hospital and why Building #9 of all places might be haunted even today.

The Charles George VA hospital was originally known as a National Hospital. It was constructed on March 3, 1865. The hospital had been constructed in the final month of the American Civil War. The Battle of Asheville would soon occur across town the following month. This hospital was built at the request of President Abraham Lincoln as the first-ever national hospital for military members who were injured and were looking for a place of convalescence. This set the stage for what is known as the VA health care facilities that now operate across the nation today. Civilian medical personnel would be assigned to work with veterans for medical care.

Already, there had been homes in similar settings operated by both the US Army and US Navy. Both of the homes were rather small and each had a capacity to handle up to 300 residents at a time. However, the National Homes that Lincoln had intended to open would handle more than thousands of military members and veterans. These military homes were only open to Union Civil War vets including colored veterans. Following the opening of the National hospital, another national hospital was open the following year in Maine.

The home was renamed the Charles George VA Hospital in the 1950s in honor of Charles George, a Medal of Honor recipient that was killed during the Korean War. 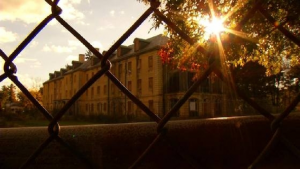 Building No. 9 contained the residential quarters for nurses working at the hospital. The building was in use from 1930 to 1967. Some have told alternative stories that the building was used as a sanatarium. Many of the former hospital employees denied any rumors or reports of the building being used for anything other than a nurse’s dormitory. The new Charles George VA Hospital began construction 1967, leading to the subsequent shutdown of the old facility when it opened three years later. For more than 50 years, building No. 9 stood there and the conditioned worsened over time. It has sustained numerous amounts of vandalism and part of the building was damaged by a fire.

In 1990, the building had been used as a place to set up a haunted house by a local company that was doing it for a fundraiser. However, there had been safety concerns because of the amount of asbestos that was left behind and further posing a health risk for the visitors. Even paranormal investigators had eschewed the idea of going inside the building until it was free from the harmful material.

Despite the building facing all kinds of damage and neglect, it still held up strong since its closure and abandonment. But it soon became a place where many thrillseekers and trespassers would break into just for the fun of it. But for what reason? Some say it’s a place to “tag” with spray paint, while others heard of possible ghost stories about the abandoned hospital. Especially the now-famous No. 9 building where rumors had started to swirl since the old hospital’s shutdown.

It was unclear when the hauntings had started. But it became a secret hangout spot for teenagers back in the 1970s and 1980s. Even when the building began to deteriorate, many ignored orders of trespassing on the property. In the early 1990s, the local Jaycees had begun using it as a haunted house for charity. Those who have visited when it was a haunted house or just as an abandoned building can tell the same stories over and over again.

One of the apparent activities that were said to be reported was the presence of random cold spots. Some had even reported the feeling of being pushed or grabbed by some kind of entity. Others who had visited the abandoned building would hear yells and screams. Even some past visitors left the building not only terrified but leaving with mysterious scratches. These hauntings were said to be dated back as far as the late 1980s and early 1990s.

Because of the numerous amount of visitors that would keep coming and going to check out the paranormal activity themselves, the federal government had to keep the place off-limits and deter any trespassers from entering. VA Police also had to patrol the area on a regular basis to catch anyone from gaining access. About a decade ago, a few teenagers were arrested and charged for trespassing. Since the property was owned by the federal government, they had to appear in Federal Court. One of them spent two nights in jail as a result.

Investigations into the paranormal activity were scheduled to take place in 2015, but had never happened due to safety issues. Also, it was said that the government had disallowed entry onto the property. Later that year, the fate of building No. 9 was soon decided. It would live to see another day in the foreseeable future and beyond.

As of today, the old VA hospital has since been refurbished as a mental health facility. The building underwent more than $9 million worth of renovations to remove asbestos and refurbish the building from the inside and out. This included the removal of asbestos that had long been intact. The new facility is under the jurisdiction of the Department of Veteran Affairs. Today, more than 8,000 veterans throughout Western North Carolina, Upstate South Carolina, East Tennessee, and North Georgia visit here for regular mental health services and counseling. The building was once known as No. 9 still stands and is better looking than ever.

Can You Still Visit The Building Today?

Considering the fact that it’s on federal property and a mental health facility, it probably won’t be a good idea to randomly visit a building and ask if any ghosts still exist. However, don’t let that damper your hopes of finding any ghosts or haunted places teeming with paranormal activity. Even with the building in its more improved condition today, the hauntings and activity may seem to have died down a bit (unless someone surfaces with a story of their own).

Building #9 will forever be etched in the minds of Asheville’s local population as one of the most haunted places in the city. While the building looks much different, it’s in much better condition than it had been more than a decade or so ago. Though the place might be off-limits to any ghost hunters out there, there are still other haunted places in the city of Asheville. You’d be quite surprised by what you can find in a place surrounded by mountains. There really is no shortage of ghost stories and paranormal activities. If you’re feeling stuck, we might know a few other places in Asheville you should check out for yourself.