There has been talk about preserving the old Craggy Prison in Asheville. But for the moment, the nearly 100-year-old building still stands and is considered by locals as one of the most haunted places in the mountainous North Carolina city. But the real question is: how haunted is it really? Are there any ghosts of inmates past wandering the halls? Or is the building itself just creepy and gives off that haunted vibe. We’ll be taking a look at the old Craggy Prison history and talk about the stories that might just make this place one of the most haunted in all of Asheville.

The Old Craggy Prison was constructed and opened in 1924. The facility was constructed in the Asheville suburb of Woodfin. It was intended to be a medium-security prison. The prison earned its namesake given its location near the Craggy Bridge. Most of the inmates locked in the facility were guilty of most crimes that were not usually considered heinous. They were convicted of crimes like assault, theft, and other low-grade felonies. For the most part, inmates who were incarcerated would often work in the laundry room near the prison grounds. Regularly, the inmates would wash up to 50 loads, including their own uniforms (and even uniforms for the correctional officers).

When they were not doing laundry, other inmates would often do road work. This included filling potholes, painting lines, or doing minor repairs if and when needed. The United States Department of Transportation assigned Their work. When the roads didn’t need any work, the inmates would spend the day picking up trash with little supervision from the correctional officers.

In 1931, the prison underwent a renovation along with more than 50 county prisons in North Carolina. As a result, the renovation was used to expand more space for more inmates (especially those assigned to do roadwork in Asheville and the surrounding area). The prison remained in operation for nearly 75 years until a new one was built down the road. In 1987, the North Carolina State Assembly approved nearly $30 million to rebuild prisons in the state. About $8.5 million of that was allocated to rebuild the new Craggy prison. The construction began soon after and was completed in 1989. Subsequently, the old Craggy prison had shut down and was replaced by the new facility located not far down the road.

Though the building itself is unoccupied, it still stands dilapidated, in need of serious repair, and gives off that creepy-looking vibe. However, the laundry building near the old prison is still being used to this day. 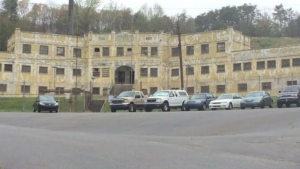 In the previous five years, there has been talk about preserving the old Craggy Prison. Local officials say that it doesn’t seem to be an attractive site for those visiting Asheville considering the condition that it’s in. Some claim that the building is no longer useful and might be a candidate for being torn down. As of today, the building still stands. But it is cordoned off by fencing to prevent any trespassers from gaining access. That’s because the debate rages on about whether or not it should be restored and deemed a historical landmark or if it should be torn down and replaced with something else.

The Old Craggy Prison is said to be sitting on a piece of prime real estate. Those who have historical sentiments believe the old prison and where it’s located tells an interesting story. The old prison sits isolated and well away from the Asheville urban era. It stood as a symbol as a building secluded from society but exuded the kind of power that no criminal could dare challenge (even though it was a medium-security facility).

There is no telling what the future will hold for this building. But for now, it’s probably still a great place to check out if you are into creepy-looking old prisons. However, you may want to keep a safe distance and maybe not break any trespassing laws. Plus, they’ve probably fenced it off since the building itself may still be falling apart. The last thing anyone needs is to sneak inside and get hurt from a piece of falling debris from the prison itself.

In 2016, more than 17 people were said to be visiting the old Craggy prison. Whether they were thrillseekers or trespassers is anyone’s guess. But some minor damage had been sustained to the building and the laundry facility nearby. If you really want to see the prison for yourself, don’t get yourself in trouble.

Apparent Hauntings and Other Stories

But the real question that remains unanswered: is it really haunted? You might expect a place like an old run-down prison to be haunted, right? It remains a mystery as to whether or not it is. You probably may never know unless you ask some of the locals who dared to trespass on the grounds. There hasn’t been any official hauntings or ghost stories about the prison. But we probably won’t be surprised if there was any. But don’t be disappointed though. There are plenty of places in Asheville that might be as creepy and possibly haunted as the prison itself.

The new Craggy Prison opened in May of 1989, thus leading to the old building’s closure. Even today, the new prison still stands in Asheville that appears secluded and isolated from the rest of the urban area. It’s as if it were a nod to the old prison. The correctional facility is still a medium-security facility that has recently consolidated with the Buncombe County Correctional Facility to house criminals in minimum or medium-security custody. Currently, the prison’s capacity is over 120. The laundry facility located in the old prison is still operational, where inmates are still doing loads of laundry regularly for themselves and the prison’s employees. Aside from their laundry duties, inmates are still doing road work and also performing other duties both inside and outside the prison under minimal supervision.

The old Craggy Prison still stands even to this day with an uncertain fate. While it might not be the place to check out when gaining access is prohibited, it’s a mystery as to what will actually be done with the place. Our suggestion? Restore the old Craggy prison to its original look (or close to it). That way, it will give you a place to explore the inside of the prison without having to risk breaking any trespassing laws. But for now, you’re just going to have to see if from the outside and take some pictures.

As for the question of whether or not it’s haunted, that question is also unanswered. But don’t be surprised if you happen to come across some kind of eerie feelings or even some cold spots. While the ghost stories seem to be few and far between, the mystery factor is certain to stoke your curiosity.

While you are in Asheville, just remember that there is no shortage of haunted places you can check out by yourself or with friends. In the Tarheel State mountains, you never know what you’ll come across during your visit.