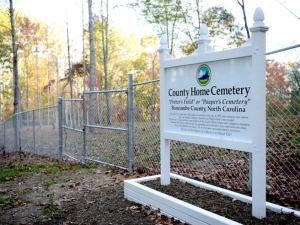 Clyde A. Erwin High School is a public school located in Asheville, North Carolina. But would you ever think that the school itself was haunted? If you are a fan of all things paranormal, you’re going to want to visit this school or even be near it probably. That’s because there had been several reports of poltergeist activity happening over the years. We’ll be discussing the school’s history, how it possibly became haunted, and if it’s a place to visit if you’re planning a trip to Asheville. If you are a local or a student at this school, consider yourself lucky (assuming you’re into the paranormal stuff).

Before Erwin High School was built, the school’s land was used for another purpose. It was the original Country Home Cemetery. This was a “Potter’s field” or a cemetery that interred Asheville’s poorer citizens. The cemetery was said to exist as early as the 1800s. However, historical documents specify that the earliest deed to the land was dated back to 1834. According to the paperwork, it declared that the cemetery was to be kept in the trust of the poor citizens of Buncombe County. Near the Country Home cemetery was a farmhouse and a home that housed the elderly. At one point, it was a group home for troubled boys.

Today, the brick farmhouse is no longer standing. As of today, it serves as the 911 Call Center for Buncombe County. One of the more noticeable features of the cemetery was that it only had one headstone intact. Almost 99 percent of the graves buried in this cemetery were unmarked. One caretaker of the cemetery said that he recalled seeing bodies being buried in shallow graves when he took over the duties in the late 1940s. The graves were mostly no more than seven inches deep. When the caretaker hired a few boys to take care of the grounds, it didn’t take long for the crew to inadvertently dig up as many as eight human skulls from the shallow graves. Eventually, they were able to gather those skulls and re-bury them in a single grave.

Clyde A. Erwin High School was in the process of building a new school. But the construction project was one that generated a lot of controversy in the process. In early 1973, school administrators chose to build it on the same land as the Country Home Cemetery. This meant that there needed to be a mass exhumation of all the bodies buried and relocating them to the new land where the current Country Home Cemetery sits today. This angered many locals considering that it was an act of “disturbing the dead.” On September 1973, a crew of workers had begun to dig up the graves and relocate them to the new cemetery. The bidding was for $79.99 for each grave and intended to dig up at least 200 graves at most. The problem was that nearly 1,000 of Asheville’s deceased were interred here. The funding was granted, but it wasn’t enough to exhume all of the buried bodies there.

Most of the graves contained skeletons, as reported by one worker through a member of the Buncombe County Genealogical Society. That same worker declared that the project to dig up graves would also be his last, given what he believed was his own personal disgust with the project. Legend has it that one of the exhumed bodies and re-interred was a young woman who died in 1965. Whether or not she was one of the last to be buried there is anyone’s guess. Others interred in the cemetery were either stillborn or illegitimate children and elderly citizens who had died with little to nothing to their names.

After all was said and done, as many as 600 bodies were exhumed and re-interred in the new Country Home Cemetery. It is believed that as Erwin High School stands today, there are more than 200 human remains that lay below the surface of what was once known as a burial ground. If that wasn’t disturbing enough, it seems to have set the stage for the series of hauntings this school would go through. 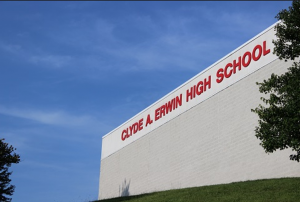 Construction of the new Erwin High School was completed around 1974 or 1975. It wasn’t until many years later, when alumni and former school staff were telling their own recollections of the paranormal activity that had occurred. One alumnus named Chad Nesbitt made a film documentary about the ghosts of Erwin High School. While filming, Nesbitt managed to set up shop in one of the coaches’ offices. He said that out of one of the windows, he could get a clear view of the concession stands and the football field. It is rumored that this is where some of the bodies remain below the surface. When he was the only person in the room, he suddenly heard sounds of humming and whistling. Before he knew it, he encountered something that resembled a floating head.

When Joshua Warren became a student at the school, he was already well aware of the conversations about paranormal activity. Even much so that he became a paranormal expert in his own right. He recalled stories about janitors working the night shift and hearing strange noises. The janitors assumed that kids might have been breaking into the school because they heard chatter in the hallways. When one janitor would investigate, nothing would turn up. Warren also told a story about how one teacher talked about ghosts when suddenly the projector was thrown off its cart. Reports of objects being thrown around were said to occur as part of this poltergeist activity.

Another story that Warren had told was probably one of his most disturbing yet. He recalled one teacher taking a small group of students to witness an excavation that happened near the school. As it turned out, a casket was unearthed. When the teacher opened it, inside was a skeleton belonging to a woman. She was wearing a white gown and had red flowing hair. Warren recalled seeing the arms positioned as if she were holding a baby.

Even today, people like Nesbitt and Warren are unsure of whether or not if there are any more human remains still underground or not. But one thing for certain, as long as there are the chances of the Erwin High School still being haunted, is still good.

Can You Still Visit The School?

While it might not be a wise thing to just waltz into a school when it’s in session, there are some parts of the school grounds you might want to check out at night. As Nesbitt mentioned, the concession stands and the football field area might be a good place to stake out and check for any paranormal activity. If you ever wondered why Erwin’s high school football team did so terribly during home games in the past, you can blame it on the poltergeists. If you cannot get inside the building, the football field would be your next best place.

Even though Erwin High School stands at its current location more than 45 years after construction, the hauntings and poltergeist activity might still be happening even today. It’s anyone’s guess as to whether or not more bodies are being exhumed or if they are in a spot where it would be impossible to dig them up. But if you plan a trip to Asheville, you would definitely want to drive by Erwin High School if you are going on a ghost hunt. Don’t be surprised if you hear strange noises or see floating objects if you are anywhere near the school grounds.