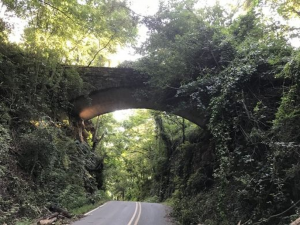 If you live in Asheville, North Carolina, you know all about Helen’s Bridge. You may also know the story of how it got its name. But if you don’t live in Asheville, you might want to plan a trip there in the future. Not only is it a vibrant place filled with fun activities, but it’s also a place where you can go on some pretty interesting ghost hunts. It’s been said that Helen’s Bridge has been haunted for nearly 100 years. Learn the story about Helen’s Bridge and the strange paranormal activity said to have happened here.

Helen’s Bridge was constructed in 1909. It was designed to connect the nearby Zealandia Mansion to the roadways connecting the rest of Asheville. The stone bridge was mentioned in Thomas Wolfe’s novel “Look Homeward Angel.” The Zealandia mansion was occupied at the time by a local politician named John Evans Brown. He later sold the home to an Australian architect and scholar named Phillip S. Henry.

After Henry’s passing, he bequeathed the mansion to his family, where they lived until the 1960s. As of today, the Zealandia Mansion serves as a historical museum. The manor and even the bridge faced the possibility of demolition to build an Interstate through parts of Asheville. However, local advocates lead the charge to deny such projects from happening. Since then, the property faces no danger of being torn down. 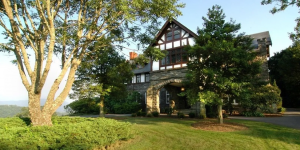 The Zealandia Mansion was built in 1908. It was actually the newly rebuilt version of a home with the same name built twenty years prior by John Evans Brown. Brown had spent some time in California during the Gold Rush and later in New Zealand. After returning the Asheville, he built the original Zealandia mansion and lived there until his wife’s passing. The home is a Tudor style home that stands well over three stories tall. When Phillip Henry purchased the home, he managed to get some renovations done, including constructing a museum (which as since been torn down).

Those who have visited Asheville had often called Zelandia a “castle on the mountain.” And it’s easy to see why that is. In 1977, Zelandia was listed in the National Register of Historic Places. Today, locals are maintaining and making sure that the Zelandia still stands strong in all of its majesty despite the threats of being torn down in the past.

Before you ask, is the Zealandia Mansion haunted. Unfortunately, it’s not. But you don’t have to go too far to find some ghosts.

The Death of Helen

Helen was a woman in her mid-30s who was said to have moved to Asheville to start a new chapter in her life. Along with her was her infant daughter. While cooking, a large fire broke out very quickly. Helen rushed to her child’s room but failed to escape after passing out from smoke inhalation. While firefighters were able to resuscitate Helen, they were unable to do the same with the child. After waking up to the news of her child’s death, Helen’s heartbreaking downward spiral started. She battled severe depression for several weeks. The pain became too great to bear for Helen. It was later on when Helen decided to take a walk in the woods. Upon coming across the bridge near Zealandia Mansion, and hung herself from one of the steel posts.

While the story of Helen’s suicide may have been linked to her child’s death, it’s been said that there may have been an entirely different story that may have led to her suicide. One such story was that Helen had been living at the Zealandia mansion for a time. Some say that she did indeed kill herself, but for a very different reason. It was said that she was having an affair with someone and was pregnant with his child. After being rejected by this mystery man, Helen was so distraught that she decided to end her life rather than give her child a chance to live. Whether Helen was married at the time or could not face the shame of being an unwed mother, her untimely death seems to be shrouded in mystery even to this day.

Today, Helen’s Bridge has become a frequent spot for paranormal investigators and fans alike. It’s been said that some people believe that Helen’s ghost might still be hanging around the bridge. However, others have said that Helen herself was seen frantically looking for her child and would soon vanish without a trace. Some have said that she’ll wander around for a bit and talk about the tragic day when she lost her daughter.

People who had driven through the bridge had recalled dealing with car trouble, despite no prior symptoms. Issues like drained batteries, engine stalling, and other mechanical issues were said to be reported. However, people who come to the bridge to “summon” the spirit would also experience car trouble as they leave the bridge. Either way, this activity is often commonplace in this part of Asheville.

Others who have passed through the bridge while walking had seen shadowy figures moving back and forth from the corner of the eye. Also, the sound of screams was said to be heard from a distance.

While it may sound like some kind of dark spell, it is said that the spirit of Helen can appear if you were to visit the bridge at night and repeat her name three times. It is said that even when done properly, she may never even show up. But some strange sounds or happenings like car trouble may still be occurring. If you ever go to Helen’s bridge, you might want to do this at your own risk. Even though Helen is a relatively harmless spirit, who knows what else could happen if you even attempt summoning her.

Can You Visit The Bridge?

Rumor has it that the bridge is said to be off-limits. But that is something to take with a grain of salt. However, if you are in Asheville, it might be wise to check with the appropriate city officials to see whether it is accessible. If it is, then anytime would be a good time to check out the bridge for yourself. If you dare, you can go at night and try your hand at summoning Helen. It is advised that if you are in Asheville, you might want to travel by foot (unless you are looking for potential car trouble). Also, you might want to go with a couple of friends if the idea of making a solo trip seems uncomfortable enough for you (especially during the late-night hours).

Helen’s Bridge still stands today after 100 years and a terrible tragedy. But it might be one of the most haunted (and most interesting) spots in Asheville. If you ever want to explore this mountainous and beautiful city, just know that you are not short of any adventures of the paranormal kind. Whether you do see the spirit of Helen or not, checking out the bridge itself is something you want to cross off your list of things to do.

But don’t let Helen’s Bridge be the only place to check out if you are a paranormal fan. We know of plenty of other places all throughout Asheville you want to check out. Any ghost hunter will tell you that you can’t just rely on one spot to find paranormal activity.