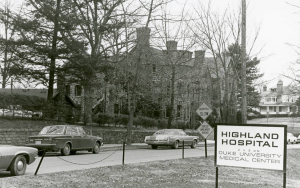 The Highland Hospital was a mental institution that was situated in Asheville, North Carolina. It was the site of a fire that had killed as many as nine people, including the wife of a famous novelist. While the original building is no longer standing, does it mean that the spirits of those who met their untimely demise still haunt the area? We will be talking about the years of the Highland Hospital, the fire that burned it to the ground, and apparent hauntings as told by locals. It’s true that old asylums have known to be haunted. But this is the story of one that still gives off an eerie feeling even though it’s been long gone for decades.

The Highland Hospital was built in 1904 and was founded by Dr. Robert S. Carroll. This hospital was dedicated to taking care of the mentally ill and those who were said to have “nervous diseases.” Before it earned the name Highland Hospital, it was known as “Dr. Carroll’s Sanatorium.” The name was changed in 1912. Carrol would maintain control of the hospital up until his departure in 1939. He donated the hospital to Duke University, where he assumed the school’s medical director’s role until 1945.

The Story Of Zelda Fitzgerald 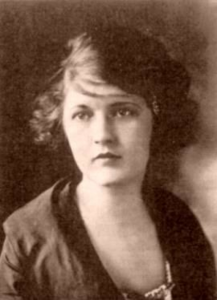 Zelda Fitzgerald was the wife of F. Scott Fitzgerald, the author of the famous novel “The Great Gatsby.” It was said that while Zelda was institutionalized, F. Scott Fitzgerald took up residency at the Grove Park Inn on the outskirts of Asheville, where he would continue to write. Already married for nearly twenty years, Zelda and Scott’s marriage appeared to take a tumultuous turn. Because of the latter constantly working, Zelda was known for often interrupting her husband. Each time this occurred, it would irritate him. Coupled with Zelda’s increasingly erratic behavior, Scott had already developed a drinking problem that had begun during his college years.

Zelda became obsessed with her intent to become a professional dancer. She had studied ballet when she was younger. She had told her friends about doing this, only to receive mixed reviews. Scott would dismiss Zelda’s ambition as a waste of time. However, despite her intention to become a professional ballet dancer, it seemed like she was re-starting her interest a little too late in life. She had begun practicing her dance routines almost as long as eight hours per day. It was said that her grueling practice schedule had contributed to her mental deterioration. In 1929, she was offered an invitation to attend a ballet school in Italy but ultimately declined it. Though the Fitzgeralds appeared to be happy and living the life in the public eye, their lives behind closed doors was in shambles.

The following year, Zelda was admitted to an asylum in France where she was diagnosed as a person with schizophrenia. In the latter half of 1930, she was transferred to a facility outside of Montreaux, Switzerland. After her release in 1931, the Fitzgeralds returned to the United States and had settled in Zelda’s hometown of Montgomery, Alabama. Around the time of her father’s passing, Scott left Alabama for Los Angeles, leaving his wife devastated in a time of her grief. It became too much to bear for Zelda to a point where she was admitted once again, this time at the Phipps Clinic in Baltimore, Maryland.

During her time at the facility, she wrote a novel entitled “Save Me The Waltz.” The novel is said to be a semi-autobiographical novel about her marriage to Scott. After sending the manuscript to her husband’s publisher, the novel was released. Scott had read the novel and quickly picked up on the parallels between the novel’s characters and the Fitzgeralds themselves. This infuriated Scott to a point where he would berate his wife in writing, revealing plans that he would write a similar story. That story became the novel entitled “Tender Is The Night,” which was released in 1934. Zelda’s novel was not a major hit and had only sold about 1,300 copies out of the near 3,000 that had been printed for sale.

After the commercial failure of “Save Me The Waltz” and Scott’s harsh criticism of the book, Zelda spent most of the 1930s in and out of psychiatric facilities. During her time in these facilities, she was able to take up painting. Like the only novel she had ever written, the response to her artwork was not what she expected. In 1936, Zelda was committed to Highland Hospital for the first time while Scott returned to Hollywood to work for MGM Studios. During this time, Scott carried on an affair with a movie columnist. His resentment of Zelda grew even larger when their daughter was kicked out of boarding school. Scottie Fitzgerald would later go on to Vasser College, which further infuriated her father and led him to blame Zelda.

Scott broke off the affair in 1938 and returned to Asheville. However, on a trip to Cuba in 1938, it would be the last time Zelda and Scott would see each other again. After Scott was brutally beaten and hospitalized, Zelda returned to Highland Hospital in Asheville. She was released in 1940. Later that year, Scott died later that year in Los Angeles of a massive heart attack. Three years later, Zelda would return to Highland Hospital, where she lived out her final years. 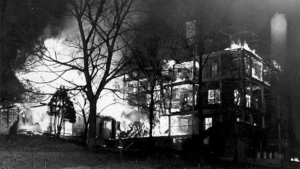 On March 10, 1948, Zelda Fitzgerald was scheduled to undergo an electroshock therapy treatment. While locked in her room, a fire had broken out in the kitchen area. The flames quickly traveled up the dumbwaiter shaft and had spread throughout the entire building. The fire escapes were completely destroyed since they were made out of wood. As a result, a total of nine women had perished, including Zelda Fitzgerald. She was positively identified by dental records and a lone slipper believed to belong to her. She was buried next to Scott in Rockville, Maryland.

After the fire, the property where the Highland Hospital stood was still owned by Duke University. It wasn’t until the 1980s when it was sold. As of today, it serves as a recovery home for teens and young adults. It is said that the spirit of Zelda is known to be walking around the campus. Zelda was known for taking frequent walks during her many stays at Highland Hospital. A former employee of the facility recalled telling the story of encountering the spirit of Zelda. He claimed that she looked at him and was trying to remember his name. Others have also reported the spirit of a young man, believed to be in his 20s. It was said that the man had died at the hospital in an unrelated incident long before the fire.

Can You Still Visit The Current Site?

Considering it is now a private facility, it would be unwise to waltz right in and ask if they have seen Zelda. If you are lucky, you might just want to take a walk around the neighborhood. You could catch Zelda taking one of her usual walks. If you are unable to see Zelda, don’t fret. There are plenty of haunted places to check out for yourself in Asheville.

Highland Hospital will forever be remembered as a place where one of the worst tragedies in Asheville history had occurred. If you are looking for a ghost hunting adventure, you might want to check the place out (or at least the neighborhood where the surviving buildings are). While the story of Zelda Fitzgerald was a tragic one, it set the stage in becoming one of Asheville’s most haunted places. Despite her violent and sad past, she’s a relatively harmless ghost if you ever get the chance to encounter her.