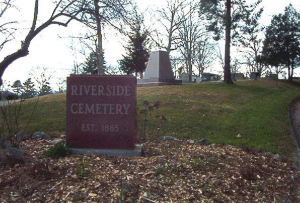 The Riverside Cemetery in Asheville, North Carolina, is the final resting place of many famous and notable residents of the picturesque city. Before that, it served as the site of one of the American Civil War’s final battles. Today, it stands as one of the most popular landmarks in the city of Asheville. Though it may come as no surprise, it comes with its share of hauntings. We’ll be taking a look at the historical Battle of Asheville that took place and how this cemetery might have been haunted in the first place.

The Battle of Asheville 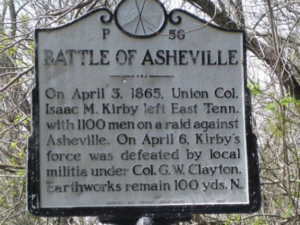 The Battle of Asheville took place on April 6, 1865. This was considered to be one of the final battles of the American Civil War. General Robert E. Lee and the Confederates would later surrender to the Union at Appomattox just three days later. A Union Colonel by the name of Issac Kirby had planned on overrunning Confederate forces and capturing the city without any casualties. Though he believed to have prepared his army of men for an attack against 1,000 Confederate soldiers, only 300 of them under the command of Colonel George Clayton could bear arms. Though they were thoroughly outnumbered, Clayton’s Confederate forces utilized two Napoleon cannons against Kirby’s attachment of over 1,100 soldiers.

For five hours, Union and Confederate soldiers exchanged fire (with the latter firing off the cannons occasionally). Despite the Union holding four times the amount of manpower compared to the Confederates, Kirby and his men were unable to capture Asheville for fear that the Confederates were in the process of dispatching reinforcements, thus increasing the potential of a further bloody battle. While there were no significant losses of life, few soldiers were killed on either side as a result.

Though the surrender of the Confederates was set in stone, the capture of Asheville by Union soldier would soon become inevitable as part of the 1865 Stoneman’s Raid that began in the previous month. General George Stoneman and his Union forces had captured several North Carolina cities with Asheville being the last of them on April 26, 1865. That same day, the rest of the Confederate Army under the command of Joseph E. Johnston traveled to Durham to announce their surrender to General William Tecumseh Sherman. It is said that this surrendered marked the official end to the war.

The battle of Asheville was seen as an opportunity by the Union to capture a Confederate city that relied on the railroad that connected Asheville with the rest of the south. It was there where Confederates would receive supplies in their ongoing war against the Union. General Stoneman managed to damage parts of the Virginia & Tennessee Railroad, ultimately cutting off any support.

Riverside Cemetery: Early Years and Beyond

Some twenty years after the Battle of Asheville, the need for a cemetery was growing. Thus, the land where the battle took place was available. It was established as a cemetery in 1885 and remains active to this day. As of today, more than 13,000 people are interred in this cemetery. This also includes well over 9,000 monuments and mausoleums. If you appreciate great artwork, then this cemetery might be a good place for you to check out.

Because this is indeed a graveyard, it does come with plenty of stories (ghost or no ghost). Some of them are quite fascinating, while others are quite gruesome. While so many people are buried here, many are interred here have a unique story behind them. Here are some of the notable people that are known to be buried here: 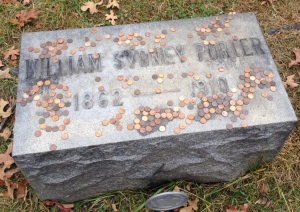 William Sydney Porter (or famously known as O. Henry) was a writer that would always write something and end it with a surprise of some kind. His writings were captivating and quite interesting. If you ever visit his grave, you’ll notice that there are plenty of pennies that are lying on his headstone. This is said to be paying homage to a famous quote in one of his short stories. To quote the story of “Magi,” “One dollar and eighty-seven cents. And sixty cents of it was in pennies.” If you have a penny or two to spare, O. Henry himself would probably appreciate the gesture. 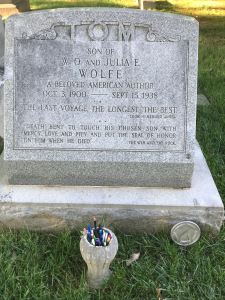 Another famous author that is also buried here is Thomas Wolfe. Some may know him for writing “My Old Kentucky Home,” but his most famous piece of work was the novel “Look Homeward Angel.” Fans of his work would often leave pens in the flower urn of his gravesite. Some have even snuck in some bourbon as a tribute to Thomas Wolfe and his Kentucky roots. If you drink, you might want to keep the bourbon at home (assuming you are traveling). Plus, drinking in a cemetery might be against their rules.

More than hundreds of veterans are buried in this cemetery, including a few Confederate generals. James Martin, one notable general, known for commanding a group of Confederate soldiers in defending North Carolina against Union forces. Another notable figure of the Confederacy was Zebulon Vance. He was known as “The War Governor of the South.” Aside from his service in the Confederate army, he was a known politician. He served as a state senator and later a U.S. Senator and Governor of North Carolina.

Though many confederate soldiers are buried here, there is an interesting twist. In the veteran’s section of the cemetery, it is said that nearly two dozen German sailors from World War I are also buried here.

Though it is a cemetery, it does come with stories of various hauntings that have taken place. Many of the cemeteries visitors (by way of a guided tour or on their own accord) have heard multiple gunshots and even some cannon fire. Some have seen the spirits of one or even multiple Confederate soldiers marching in formation and disappearing off in the distance.

Others who have visited the cemetery said that they have also heard children laughing and playing. This is said to occur in the mornings when the weather tends to be foggy. Rumor has it that many of the spirits belonged to children who died by way of illness or accident. Considering that a yellow fever epidemic swept through the south during the 19th century, most of the children buried here may have been among the victims.

While there are 13,000 people buried, rumor has it that there maybe even more. That’s because most of the graves that are unmarked. If you are walking the cemetery grounds, you may want to keep your feet on the three and a half miles of asphalt paths. You never know if you may have accidentally stepped on a grave.

The Riverside Cemetery is a place where you really want to check out during the day (and maybe the early evening if allowed). This cemetery has a lot of history and so many stories of those buried here. Don’t be surprised if you start to get some strange eerie feelings. If you hear gunshots, you probably should not be alarmed since it might be common given its history of the Civil War. Asheville has plenty of haunted places to check out. But you’d be crazy to miss out on the chance of going to the Riverside Cemetery. The best time to go might be during the day. If it’s foggy out and you’re close by, that’s also the perfect time if you want to catch some shadowy figures wandering from place to place.