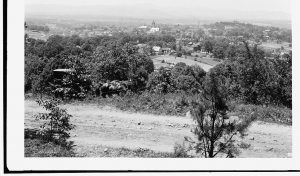 On November 12, 1906, an escaped convict came to Asheville looking for his old girlfriend. Unable to find her, Will Harris goes on a drunken rampage, killing 5 before being stopped. Do the ghosts of Harris and his victims stalk the streets of Asheville and Barley’s Taproom?

Will Harris was a convict with a rap sheet a mile long for everything from burglary to assault. He had even managed to murder a police officer.

Years before the tragic night in Asheville, he was part of a chain gang in Charlotte and escaped. The city ended up hiring its first black detective, Van Griffin, to track him down. The detective managed to arrest him and got him booked in the county jail. Harris escaped again, Griffin caught him again, and this time had him sent to the prison in Raleigh, NC.

Once again, Harris pulled his Houdini trick and got free on the chain-gang he was attached to and escaped in a wagonload of bricks. Tired of his run-ins with Detective Griffin, he decided to try his luck in Asheville, NC. He wanted to get out of the Detective’s jurisdiction, but he also had an old flame, Mollie Maxwell, there.

Harris showed up in Asheville on November 12, 1906. On the morning of the 13th, he spent $35 buying nice clothes, a Savage .303 rifle, and a jug of bourbon. He made his way out to Mollie’s sister’s place. Pearl Maxwell lived in an apartment on Valley Street near Eagle Street, an African-American community known as the “Devil’s Half Acre.” It was the place in town for the segregated Black folks to live and run their businesses.

Pearl confirmed that Mollie had moved about twenty miles away to the town of Hendersonville, N.C. It’s unclear if she moved to hide from Harris.

Being the charmer he was, he decided to try his luck with Pearl. She allowed him to stay until her man Toney Johnson got home later that night. Harris got more drunk as the day dragged on, and was ready for a fight when Johnson came home around 11 P.M.

Johnson, fearful of the convict’s mad rantings about ‘being the Devil’ and the gun he waved around, ran to the local police station for help.

Two officers, Captain John Page and Officer Charles Blackstock answered Johnson’s plea. He warned them that Harris was armed and dangerous. They went to the apartment but Harris caught them off guard. He managed to shoot Officer Blackstock through the closed door, killing him instantly. Another shot went through the Captain’s arm, allowing him to escape the apartment.

Afterward, he made his way to the business district shooting randomly. He gunned down three citizens: Benjamin Addison, a shopkeeper, Walter Corpening, walking home from work, and Tom Neil sitting on his porch. A poor dog has killed down a nearby alleyway.

Meanwhile, Captain Page and another officer, James Bailey, got into a gunfight with the convict. The battle lasted ten minutes. Bailey was shot and killed, but Harris was wounded. He took off south out of the city before the dust even settled. He had killed two officers and three innocent citizens.

A mob of some 300 angry, revenge-driven men showed up at the police station. They were organized into groups and sent out to help search for the missing convict. Some had even loaned guns from Finkelstein’s Pawn Shop before heading out. A bloodhound named Biscuit Eater helped in Harris’s undoing. It took two days, but on November 15 Harris was found sleeping in a barn outside of the town of Fletcher, some 8 miles away.

He was discovered by a group of men led by a railroad agent named Frank Jordan. When someone from the group shot at him with a shotgun, he dove into a laurel bush for safety. He promised to kill anyone who strayed too close, and he emptied his rifle into the air over the mob.

The group retreated and waited for reinforcements to arrive via train. Over 100 men now had their sights on the bush where Harris was hiding. When the men stopped firing, 500 bullets had been shot and Harris had over 100 bullet wounds.

His body was so badly mangled that they had to assume they had shot the right man!

Will Harris’s body was put on display for the townsfolk, proof the nightmare was finally over.

A reward had been created immediately after the shooting, and the group who shot Harris requested the money go to the windows of Officer Blackstock and Officer Bailey. Harris’s gun was presented to the Captain. The City of Asheville prohibited the sale of alcohol in the town the very next year because of the drunken violence.

Thomas Wolfe, who lived in the town when he was a child, was sleeping less than a mile away from the shoot-out. He would often go to the Vance Memorial and run his fingers over the chip left there from a glancing bullet. He ended up writing a short story called “The Child by Tiger,” which recounted the episode.

The Hauntings of Barley’s Taproom

If ghosts are trapped because of violent death, then it would make unfortunate sense for Harris’s victims to be unable to move on. Eagle Street is said to be haunted by the men he killed. People have reported seeing an old-fashioned cop walking and running up and down the streets. Is he still trying to capture Harris in the afterlife?

The sound of a dog barking and howling can be heard in dark alleyways but the animal is never seen. Shadowy figures dart around the entire area and ghostly apparitions make themselves known.

Barley’s Taproom and Pizzeria is in the immediate area, so it seems the ghosts venture into the pizzeria on occasion. One of Harris’ victims was apparently killed on the ground where Barley’s now stands.  The area was originally home to the town’s gallows and has been the site for many supernatural happenings during most of the 20th century.

There was a report of a black shadow man striding down Biltmore Avenue before disappearing into the door of Barley’s. The owner of Barley’s once reported he’d seen a man’s shadow walk past his office windows–an impressive feat seeing as he works on the 2nd story!

Ghostly visages, flickering lights, objects moving on their own and strange sounds have all been reported at the bar. Poltergeist activity has been attributed to either Harris himself or one of his victims. Visitors have claimed to have seen a little ghost girl in a white dress while in the restrooms of Barley’s.

Paranormal groups have checked the place over thoroughly and have left with ghost pictures and EVPs. Electronic Voice Phenomena are voices or sounds recorded when there is no noise, or a strange voice is heard during a recorded conversation. It’s believed to be the work of spirits.

Barley’s Taproom can truly say that they do serve all sorts of spirits indeed.